What's New
You are at:Home»Features»Be Kind, Rewind — An Ode to Blockbuster and the End of an Era
Features

Be Kind, Rewind — An Ode to Blockbuster and the End of an Era

Growing up, Blockbuster was a staple in my childhood. As a movie addict, watching films at every chance I got was essential. And good ol’ Blockbuster was the place to go. Sure, there were competitors like Hollywood Video, but the blue and gold- designed logo called to me and that was where the magic happened.

Shelves upon shelves of films and genre choices to select. And they were right there within reach. It was so hard! A lot of times, I’d just walk out with around three movies at a time, and only the weekend to watch them. Of course, that was before Blockbuster changed their rental terms to seven-day rentals for older releases, which gave everyone more time. 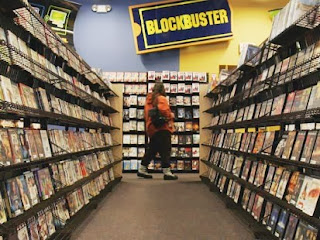 There were so many great experiences I remember from visiting the movie store. Roaming every section, spending an hour figuring out which movies to choose, reading every synopsis to make sure the movies being rented wouldn’t turn out to be major disappointments, and so on. I once went to Blockbuster in my pajamas just to rent Inception because my friend had to see it at that moment.

The first movie I ever bought from the movie store is Titanic, and as a kid rented A Goofy Movie twice just because I could. I still happily have their membership card stashed somewhere and worn from use. One of the managers at my local Blockbuster, who I swear looked like actor Justin Long, knew me by face because I was always there.

Roaming their shelves was kind of like being at a library. A huge, highly entertaining library with colorful movie covers and TVs streaming information about its latest releases. The store was even one of the first places where you could rent video games without paying a hefty $50, only to realize the game was not worth it. And as I, and everyone who grew up with the movie giant, say goodbye, let’s take a look back at Blockbuster’s history and examples of what eventually led it to finally close its doors.

Blockbuster was founded in Dallas, Texas in 1985 by David Cook. From there on, it grew to be one of the biggest movie rental businesses and practically owned the market in throughout the 90s and early 2000s.

At the height of its growth in 2004, Blockbuster employed 60,000 people across 9,000 stores nationwide. That’s pretty impressive, if you ask me. At one point in time, from 1995-2001, they even had their own awards show called the Blockbuster Entertainment Awards. That’s what a big deal they were. 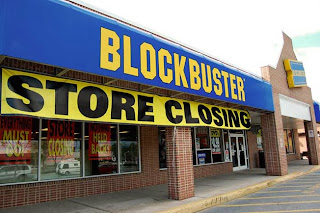 In 2000, it had an offer to buy a new up-and-coming business called Netflix. Yeah, you know that name, and most of you probably subscribe to their services like I do. In hindsight, this probably was the beginning of Blockbuster’s downfall because, let’s face it, it could have wiped out their competition early on.

However, it wasn’t that which hastened their plummet into practical non-existence. It was their general lateness into the game of online streaming and Red Box-type offers to customers that sentenced them to death in the end.

They declared bankruptcy in 2010 and closed hundreds of their stores across the U.S. over the next few years. Their online and DVD-by-mail services weren’t doing that great either, and they continued suffering, even closing down over 300 stores in January of 2013.

And in 2014, Blockbuster (now owned by Dish Network) will be making moves to shut down the rest of their remaining stores, both physical and virtual, including their DVD-by-mail services. Rentals ceased on November 9, and only 50 franchise-owned stores and their Blockbuster on Demand services with Dish Network will continue to cater to customers.

The ride for Blockbuster has been a rough one over the last few years, going from a huge chain with market power galore, to slowly having it’s flame snuffed out by competitors and its inability to keep up with the quickly-changing business dynamics of the 21st century.

But with Blockbuster’s end comes a look back at what it did for the movie rental business. It paved the way for businesses like Netflix and Red Box and it was the first major store to offer movie and game rentals throughout the U.S. Blockbuster leaves behind a great legacy and will always be remembered with great fondness and nostalgia.