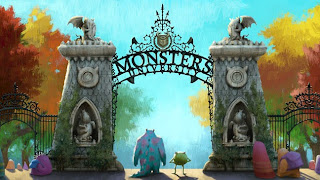 It’s that time of week again! If you’ve already filled up your shelves with rows and rows of movies, that’s ok, but you’ll still have to make some room for a little more!

Monsters University: The prequel to Monsters, Inc. brings back Sulley and Mike Wazowski, but not quite in the way we thought we knew them. The film explores Mike and Sulley’s college days as they both struggle to fit in and go from hating each other to being friends who make the best scare team. Starring the voice talents of Billy Crystal, John Goodman, Steve Buscemi, Helen Mirren, Charlie Day, Nathan Fillion, and Sean Hayes.

R.I.P.D.: Nick is a cop. Protector of the innocent and all that jazz. When he finds himself suddenly deceased, he’s recruited in the Rest in Peace Department, protecting and serving the living, by taking care of it from the other side. Nick ends up working with dead veteran cop Roy and while doing their jobs, are also on the hunt for whoever murdered Nick. The film stars Ryan Reynolds and Jeff Bridges.

Byzantium: A mother-daughter duo, Clara and Eleanor, reside on the top two floors of a brothel in a small seaside town. Eleanor befriends a local boy named Frank and spills her secret, that she and her mother are more than two centuries old and live off of human blood. When the secret is out, it endangers the two women and the entire town. The film stars Gemma Arterton and Saoirse Ronin.