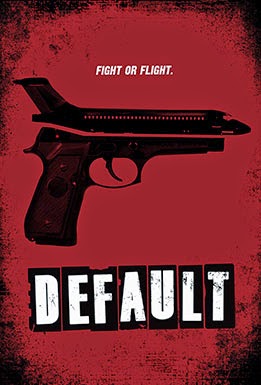 Somali pirates have been the center of many a film in the last couple of years. Last year alone, we had Captain Phillips, the suspenseful Danish film A Hijacking, and two documentaries: Stolen Seas and The Project. So without probably meaning to, they've made a name for themselves, maybe a misunderstood one according to director Simon Brand, whose English-speaking debut film Default raises some very interesting questions about the nature of fear, perspectives, and choices. 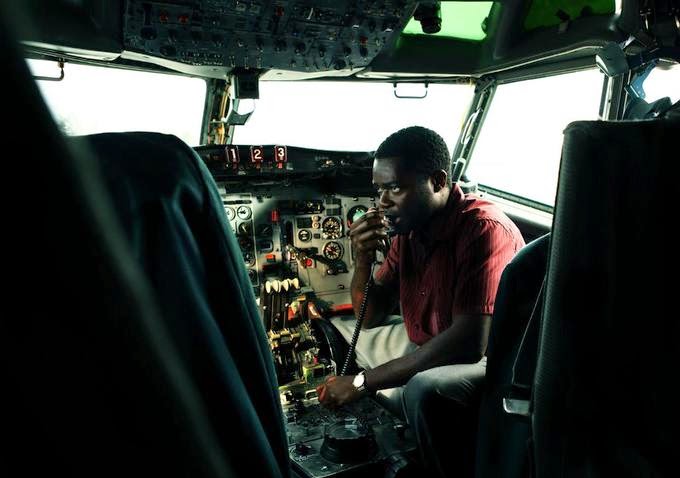 Mateo Alamusi, a Somali pirate, is arrested by U.S. authorities after being abandoned by his co-pirates in a hijacking situation. He's only 16 years old and is being held for trial in New York City. Frank Saltzman (Greg Callahan) was at some point in his life a world-renowned news journalist. These were his golden years, but he's now relegated to hosting a travel show and being a bit bitter. Frank and his crew Kane (Stephen Lord), his wife Juliana (Katherine Moennig), Marcela (Jeanine Mason), and Pete Bowers (Connor Fox) are on their way back from Seychelles, just off the coast of east Africa when their plane, Nairobi 86, is hijacked by Somali pirates.

Atlas (David Oyelowo) and his team of miscreants board the plane and immediately tie up the pilots, (Karim Ndiaye, Benjamin Ochieng) and the flight attendant (Peres Owino), along with the rest of the news crew. They take all their things, wave their guns around, but Atlas, the non gun wielder, requests only two things: their cooperation and that the cameras they have keep rolling. Why? Well, Atlas planned all this for a reason, and he most definitely wanted to get the attention of Frank so he can get an interview and explain his side of the story. 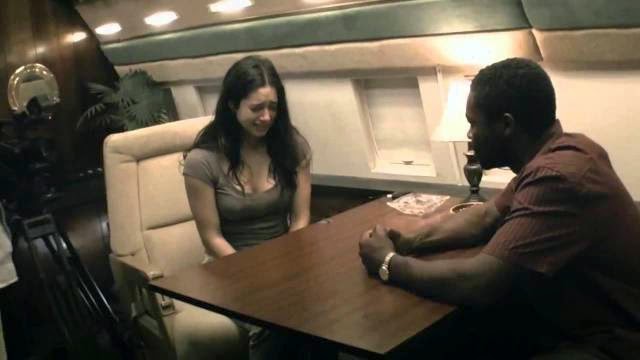 Default is a film that grips you automatically. Simon Brand tries to appeal to the masses with the subject of Somali pirates, but screenwriters Jim Wolf Jr. and Dan Bence have ulterior motives. Rather than make it a generic film and only having it be a hijacking and a hijacking alone, the film unravels through a series of events that promises to give us more than a simple plot. And it does deliver on that account.

The film is shot documentary-style, and if one didn't know better, you'd think that the entire film is based on some real-life event. One of the immediately distinguishing features of the film is its camera work. It's all very shaky and unstable. Yes, it gives us the effect of someone holding the camera, but an hour and a half of this kind of camera work might make you rethink watching the film. This choice of camera use is a bit too overdone and sometimes headache-inducing.

David Oyelowo is intense as Atlas and his performance is clearly the strongest of the cast. It's clear he has his own plan and wants to have Frank understand why the pirates become what they become. There's talk of choices, of labels, of misunderstandings. He doesn't particularly justify the pirates' actions or anything, but he does give us a lot of food for 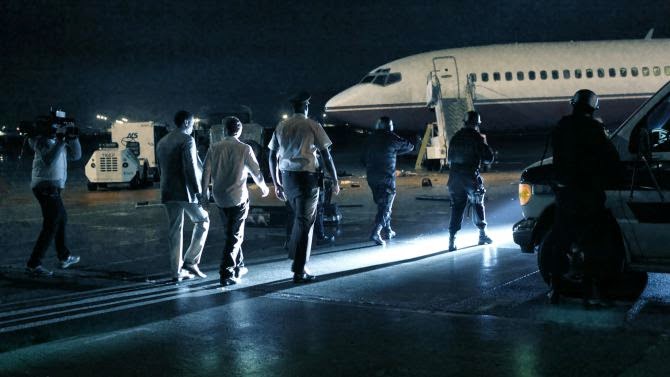 thought with his line of questioning and actions. It's definitely clear why Oyelowo took on this role.


The rest of the supporting cast does really well, and even though good actors, such as Katherine Moennig and Stephen Lord, have less to do than Oleyowo and Greg Callahan, it's still highly effective given the nature of the film.

Ultimately, despite certain flaws, Default is a high-octane suspense film that is gripping and captures you from the first moments of the film through to the end. There's a lot of interesting conversation that takes place which could have been expanded on, but at least it gives audiences something to think about in regards to the questions it asks. Simon Brand does a good job keeping a steady pace. The shaky camera work might annoy you, but it's worth sitting through with this film.

Posted by Mae Abdulbaki at 4:27 PM