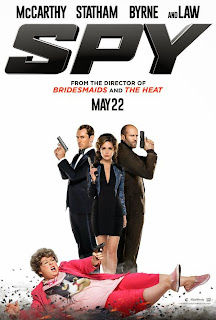 Melissa McCarthy's comedic career has sadly been hit or miss as of late. Last year's The Heat was a fun take on the buddy cop comedy with the insertion of two females instead, but McCarthy's Tammy was definitely not in the realm of funny and suffered from the illness of trying too hard. Which is why teaming back up with Paul Feig (Bridesmaids) for Spy is a brilliant idea, because not only do they work together well, but Feig, who wrote and directed the film, knows how to highlight McCarthy without going overboard. 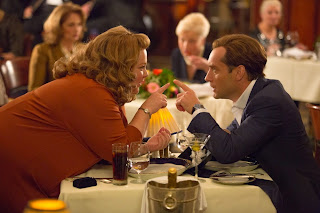 Teacher-turned-CIA-analyst Susan Cooper (McCarthy) has been wallowing in the basement of the CIA for ten years. She is quite literally the eyes of Agent Bradley Fine (Jude Law) when he's out in the field and makes sure to keep him safe on missions by using her computer power back at the base. But when Fine disappears, Cooper is enlisted by uber serious director Elaine Crocker (Allison Janney) to "track and record" Raina Boyanov (Rose Byrne), an arms dealer looking to sell a nuclear bomb to terrorists. Being out in the field, Cooper (and her many disguises) takes it upon herself to infiltrate the ranks of Boyanov. All with the not-so-much-help Agent Rick Ford (Jason Statham) getting in her way.

Melissa McCarthy is back in comedic form. She's helped along with a fantastic supporting cast, who are just as willing to look and act as ridiculous as we're used to seeing McCarthy. Sometimes all it takes is a great ensemble cast to spice things up and balance everything out plotwise, so not all the comedy is riding of McCarthy's back. And this is very true in Spy. 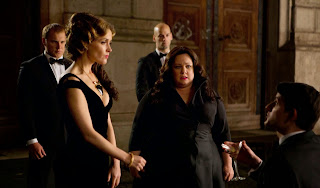 The plot is a spoof of spy movies, with Jude Law looking every part of a handsome James Bond and Rose Byrne playing the very fun snobby villainous arms dealer. Jason Statham completely steals the scenes he's in. And while we're used to seeing him in very serious action roles, Statham has a knack for comedic timing and is completely ridiculous here, which works well opposite the silly, yet more down-to-earth character McCarthy plays.
Feig never goes overboard or crosses the line with the comedy and physical humor. He brings just enough plot and fun to make this film chuckle-worthy, sprinkled with its share laugh out loud moments along the way. The plot toys with who is really who they say they are, and the double crossing agents make for a more enjoyable part of the plot. Spy is definitely a hit on McCarthy's part, with a fantastic supporting cast. Feig writes and directs knowing what ultimately works and what doesn't and everyone is on top of their game, making it a comedy that won't disappoint.