By Mae Abdulbaki on March 6, 2013 0 Comments
Another ABC Family original holiday movie has come and gone and it is most definitely not a bad way to spend two hours on a Sunday night. ABC Family original movies have often been hit and miss, ranging from the dry and mundane, to the cute and feel-good. “The Mistle-Tones” is a musical that hits all the right notes. It falls in the cute and feel-good category with music and Christmas joy peppered throughout.
Holly (Tia Mowry) has dreamed of being a part of the Snow Belles, a Christmas singing group, for years. She’s always wanted to perform with them at the Christmas Eve mall spectacular and be a part of her mother’s legacy. On the day of auditions, she arrives a few minutes late and is immediately disqualified by Marci, the group leader (Tori Spelling) regardless of her amazing audition.
Disappointed and upset, Holly sets out to start her own singing group. The mall manager, who hosts the Snow Belles, agrees to have auditions for the Christmas Eve performance slot. So, along with one of her co-workers, Holly sets out to find others interested in joining her group. In the end, Holly has an interesting blend of singers from every department in her organization. She also blackmails her boss into helping them work on their technique after seeing his entertaining performance at a karaoke bar.
The movie isn’t a usual one for ABC Family, whose originals have been more focused on romantic comedies in the past. “The Mistle-Tones” is a musical and it focuses more on Holly and her passion for singing and carrying on in her mother’s footsteps. The romance between her and her boss, Nick, is just an addition to the story and is not front and center. 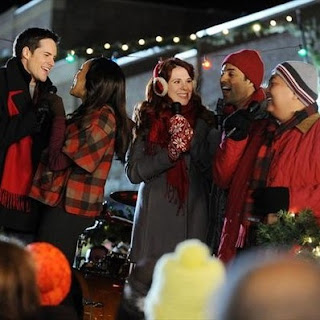 “The Mistle-Tones” is thoroughly enjoyable and better than a lot of made for TV movies. It isn’t overly cheesy and the music gives the movie a very fun element. It makes you wish that every mall had a Christmas Eve singing competition. Holly is determined without being overly dramatic about the singing competition. Tia Mowry brings charisma and the Christmas spirit into her role. She gives her character just the right amount of passion and joy without being too perky and has chemistry with everyone onscreen. Holly is a very likeable and relatable character.
Jonathan Patrick Moore plays Nick, Holly’s uptight, workaholic boss who has a secret: he is a karaoke king. His portrayal of the ‘can’t cross the line’ boss and the entertainer are on point. He does well playing opposite sides of the personality spectrum and really takes karaoke to another level of entertainment. His character goes from uptight and results-driven boss to a guy who realizes that being a workaholic may get you results in the working world but really limits any personal endeavors.
Tori Spelling’s Marci is a stereotypical diva who wants the attention all to herself, takes everything too seriously, and is threatened by anyone who may be even remotely more talented than she is. Marci is annoying and thankfully only appears enough for the audience to understand that she is the antagonist. Even in her scenes, she doesn’t do much except carry her dog around a la Paris Hilton and put everyone down.
The songs are fun, upbeat, and are a different take on classic Christmas songs. They definitely add an energetic spark to the atmosphere and the movie would be incomplete without their inclusion. Overall, the “The Mistle-Tones” is well made, not too over the top, and is enjoyable and entertaining from start to finish. It will definitely get you into the Christmas spirit and have you singing along to its tunes.