What's New
You are at:Home»Interviews»Interview: Cast of ‘The Mortal Instruments: City of Bones’ Talks Adapting the Popular YA Novel Interview: Cast of ‘The Mortal Instruments: City of Bones’ Talks Adapting the Popular YA Novel

By Mae Abdulbaki on August 20, 2013 0 Comments
A few weeks ago, I was fortunate enough to sit in on a conference interview with some of the cast from the new fantasy book-to-movie adaptation The Mortal Instruments: City of Bones. Lily Collins, Jamie Campbell Bower, and Kevin Zegers answered questions from several media outlets and a few of these questions are transcribed below for your reading pleasure.
Clary Fray (Lily Collins) is a normal girl until she discovers that her mother’s been hiding a very important secret from her: Clary’s a Shadowhunter. Essentially Shadowhunters kill demons and protect the mundanes (non-Shadowhunters) from them without them knowing. When Clary’s mother is kidnapped and she has a run in with her kind, she must quickly acclimate to this new world and her new abilities in order to protect the mortal cup, a sacred Shadowhunter artifact, before it falls into the wrong hands.
Q: Obviously coming into a project that’s beloved by a number of people, what kind of pressure do you feel when portraying characters people have already envisioned in their mind?
Lily Collins: Well, coming into this situation, I was a fan of the books before I was cast so of any actor who would’ve played Clary, I would’ve definitely had expectations and an of who and how Clary should be played. I think there comes a certain point in which I had to separate myself as an actor and realize that I’m going to put little bits of myself and really pay honor to the way Cassandra wrote Clary. And so I try not to think about all the pressure when I was playing her because it would only really distract me. And once we got on set, none of us were thinking of what expectations were put on us, except for the ones we were putting on ourselves. 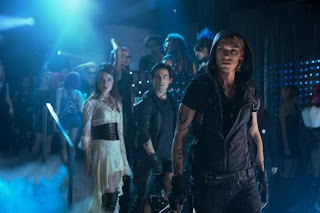 Jamie Campbell Bower: the fact of the matter is that we’re not going to be able to please everybody. But here’s the thing: We were cast in the movie, so… someone had to see something in us that stuck out that they believed in. So we take elements of ourselves and we also take the bible that Cassie [Cassandra Clare] has given us, the books, and you work out who you want these people to be in just over two hours’ worth of footage.
Q: What does this film mean for your careers? Are you afraid of being typecast?
Lily: What’s interesting and great for us in this film is that this is not our first film. We were able to do other projects before this one to avoid any ability to be typecast. I think our characters go on so many different experiences and journeys throughout the series of books and if we continue to get to do more than the two that are planned, then we get to show different sides of our personalities and the character. I signed on because I wanted to play Clary for as long as I was able to. I loved her and love what she stood for, and I love the world and what Cassandra [Clare] wrote. So it’s an honor to continue to play Clary and to experience it with her. 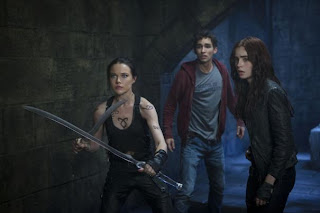 Kevin Zegers: I’m grateful that I’ve been able to work on stuff before this. And it is a little more difficult when you’re introduced to people as the one character. People have never seen you in anything before and they sort of go, “right, you’re Clary Fray from The Mortal Instruments, I’ve never seen you in anything, I have no association with you doing anything besides that.” And all of us have ambitions outside of this one film, so the good news, certainly for us, we’ve spoken about it, [is]we love this story and the longer we get to be a part of this franchise of films is great. Great for our careers and for the stuff that comes along with that. This is not intended to be that last thing any of us do by any stretch of the mind.
Jamie: I think what Kevin said is important actually.
Kevin: Thanks, Jamie. [laughs]
Jamie: Yeah. I just want to add to that. I think what’s great for all of us is that we’ve all worked before. This is by no means our first job that any of us have come to, so this is hopefully not going to pigeon-hole us in a way. But, I could be totally wrong. But it’s great that I get to go back and work together as a team and get to work with my best friends again. When I was cast, was that at the forefront of my mind, no because I’ve been in shows and I’ve done movies where we thought it was going to be more. And you always prepare yourself for, no you have to focus on the element and the movie you’re shooting at the time, rather than if it’s going to last forever.
Q: Would you guys say that the fantasy genre is something that really attracts you? I know Jamie, for example, you played a vampire in the Twilight Saga. So are those roles really what gets you guys? 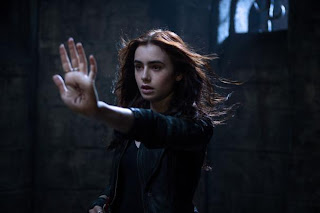 Jamie: I’m English, so I suppose I’m always cast either as the weirdo or as someone who has a little bit of something wrong with them. [Laughs] That’s sort of just how my career’s gone. Let’s be honest here, let’s be open. You look at the movie industry. The movie industry is an industry at the moment which is in a little bit of trouble. Studios need to make movies they know people are going to see. So, an adaptation of a book that has sold 22 million copies is a bankable bet, let’s put it that way. I’m just thankful, and happy, and proud we made it so good because there have been adaptations that have not been anywhere near as good as this. So when it comes to fantasy, everyone likes to be taken away from the mundane elements if life. [Laughs at the use of mundane, as it’s used in the movie to describe regular humans.]
Lily: I personally have always loved fantasy. That’s why, for me, playing Snow White was such a big deal. I grew up loving Harry Potter and anything magical, but for me this series was the one that popped out from those. I’m thankful I got to be involved in it. But the idea that it’s edgier, darker, and a bit sexier and is quite funny are elements I didn’t find in the other ones. But I definitely love to escape reality a little while and if I get to be part of that and in taking other people with me in that journey, them that’s awesome to say that’s my job.
—
The film is based on the first book in a series of five written by Cassandra Clare. The second film has already gone into production. The Mortal Instruments: City of Bones stars Lily Collins, Jamie Campbell Bower, Keven Zegers, Jemima West, Robert Sheehan, Lena Heady, and Jonathan Rhys-Meyers.
The movie hits theaters August 21.