I recently chatted with Butcher Boys directors Duane Graves and Justin Meeks. They have directed several films together in the past and have collaborated again on their new horror film. To help them out, Kim Henkel, the screenwriter for the original The Texas Chainsaw Massacre (1974) pens the script, which is his first original work in years.

The film in itself isn’t the greatest masterpiece to come from the horror genre, but Graves and Meeks are enthusiastic about it. In the interview, they talked about the movie name change, working with Henkel, and what the Butcher Boys ultimately represent.

Originally called Bone Boys, the name was later changed to Butcher
Boys. What was the reason behind the change?

Justin Meeks: It didn’t have to do with us and the
international buyers, but more so the US buyers, Red Box, and Wal-Mart. It was
a title after much transforming…
Duane Graves: Yeah, yeah, the distributor thought that
Butcher Boys had a wider feeling and
had more of a burr for audiences, so we went with their intuition on that. I mean it
was always called Bone Boys when we shot it, so it’s like if your best friend
of two years change their name, are you gonna call them by that name, uh I
don’t know. It’s hard for us. 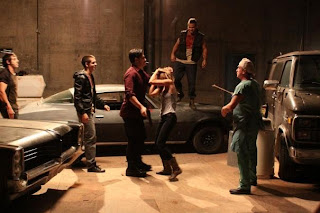 So you’re still calling it Bone
Boys, then?

Duane: Well, no. We’re trying, but we may flip occasionally. It
may be released as Bone Boys in
another country, yes. So we don’t know, but it is Butcher Boys.
I think Butcher Boys sounds
a little more deadly.
Duane: And that’s exactly what they [the distributors]thought.
And, you know, we all agreed on the title and we’re happy we went with it.
So you collaborated with
the writer of the original The
Texas Chainsaw Massacre (1974), Kim Henkel. Besides the writing
aspect, was he involved in any of the creative decisions during filming?
Duane: Well yeah, he was there. I mean he certainly would give us
his thoughts. He wasn’t one of the directors on the film, ultimately he didn’t
take the reins. But he was around, certainly… you know, he’s not a shy person
with us, so… maybe with others, but with us he gave us his thoughts. But yeah,
you know I wouldn’t say he disappeared or anything. 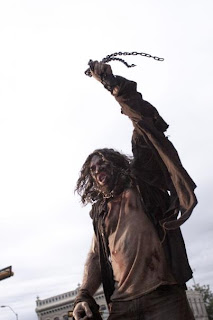 Justin: Kim is a good producer. He doesn’t mind telling us how it
is, and on Bone Boys, he was bossy.
[laughs]
Duane: Right, and what Kim would continuously say to us is if
there’s something you don’t want to confront, he didn’t mind being an asshole.
[laughs]What Kim was good at was… he was blunt and to the point and whether he
hurts your feelings or not doesn’t really come into play. [laughs]
So you were film students
of his, is that true?
Duane: The way he taught us in class was the same way he was on
set. [laughs]If we turned in a script and he thought it sucked, he would tell
you that.  As a student it was kind of
crushing, but it was the best preparation we could’ve asked for because the
business is brutal. No one’s gonna blow smoke up your ass, you know? They’re
gonna tell you straight to your face, this won’t ever make money, you’re never
gonna make it. We’ve heard that so many times from other people, not Kim, so it
prepared us for the world we’re about to live in.
Justin: And Kim will be the first person to tell us because he’s in
the profession. He taught us and it worked well. We had a lot of people working
on it.
Duane: Yeah, it was pretty much the same way filming it as it was
watching it. 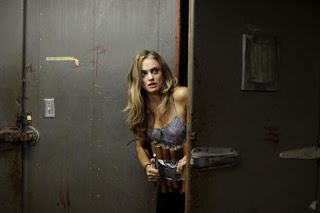 So I know Ali Faulkner’s
character, she survives at the end and gets away. Was that always the intention
for it to be open ended and lay the grounds for a sequel. Because the Butcher
Boys, they’ve seen her face and she’s seen too much.
Duane: Yeah, well I don’t think there was an idea of there being a
sequel. I can say that much. I don’t know if [Kim] had that in mind when he
wrote it. I’m sure he had that at the back of his mind thinking it would be
good to keep the last girl, like in the original Chainsaw, for a potential for
a franchise to come about.
But I don’t
think he wrote it to get to that spot. Well, I mean, the Butcher Boys represent
society or a group of people that basically denied by society and live by their
own laws, their own rules, their own morals. Or lack thereof. [laughs]
Justin: What people do behind walls.
Duane: And you know one of the things we grilled home when we
first started talking about making the film… It’s sort of like the one
character says I want what I want and I want all of it and I want it now. Every
man for himself.
Butcher Boys hits limited theaters Friday, September 6. The film stars Ali Faulkner, Johnny Walters, Derek Lee Nixon, Tory Tompkins, and Gregory Kelly.