Snowpiercer –  There was a lot of talk surrounding South Korean director Joon-ho Bong’s first English-language film. It was heavily anticipated, and before being distributed in the U.S., Bong fought with the Weinstein Company when threatened with shaving off more than half an hour of his film. The complete film is intact, though its release is unfortunately limited. Regardless, the director behind such critically well-received films like   Mother and The Host (no, not the terrible Stephanie Meyer book-to-film adaptation), lets social commentary and mystery shroud his newest film, which impresses with an all-star cast that includes Chris Evans, Tilda Swinton, and Octavia Spencer. In order to try and stop the effects of global warming, the world’s governments release into the air what is referred to as CW7. However, instead of causing the temperatures to come down a few degrees, the world is plunged into an icy, snow-white world where 7 minutes outside could lead to death.

People lucky enough to board the Snowpiercer, a fast-moving, high-powered locomotive that travels around the world, survive while everyone else perishes. But all is not well on the train, where a social class system has the poorest of people cramped into the tail, while the upper class get to enjoy the delicacies closer to the front. Curtis (Evans) and company hatch a plan to fight their way to the front, and out of their terrible conditions, by taking the train one car at a time. Mystery, violence, the human condition, and intriguing commentary about people, survival, and social class that isn’t too heavy on exposition (except in some parts) will leave you hanging on until the end. Evans proves he can carry a movie and the supporting cast are individually fantastic, even while some of their screen time is cut short. Joon-ho Bong’s vision stays strong throughout, faltering a bit near the end, but still encapsulates us into a world where a train of the last humans is as deadly as it is important to their survival. 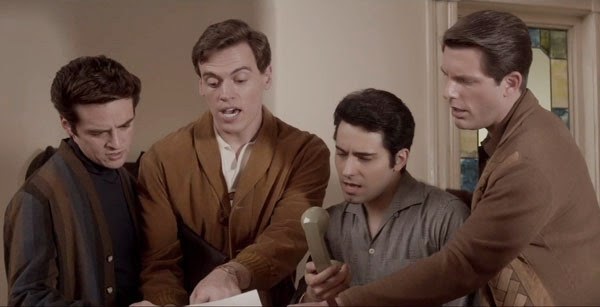 Jersey Boys – The film, based on the critically-acclaimed Broadway musical of the same name, follows the lives of The Four Seasons, a band popular at the height of the 1960s. There’s less music in the film than in the original Broadway show, and director Clint Eastwood seems intent on making a carbon copy of the show from stage to screen. In the case of Jersey Boys, however, this generally fails. A lot of key moments in the lives of these men are glossed over to make way for things that are important, and as great as the music is, the performance are just that, performances, minus the wow factor effect it should have had.
While the lives of the band members are compelling, the film often doesn’t know what it wants to be, altering between perspectives when there should be a fine line of each character’s perception of the events that transpire. After all, one of the band members states very clearly that “everyone remembers it how they need to,” but this isn’t very clear in the film. Another debilitating weakness of the film is that it doesn’t at all cater to any other audience outside of fans of The Four Seasons. This may not strike you as something odd, but you don’t have to have been a fan to enjoy their music, and the movie’s marketing doesn’t present it as such, even when the music is one of the most enjoyable parts of the film. Eastwood presents a film that could have been more than it was, and though it’s sometimes enjoyable, it’s mostly unremarkable.