A movie where the character moves from the big city to a small town has been done time and time again it’s exhausted that particular plot point and audiences as well. But every once in a while, this formula works. Not because of the shift in a character’s location, but by what they ultimately gain. Bravetown is a simple film that isn’t bogged down by a lot of style, but is instead focused on with a lot of heart and building relationships, which is the source of the film’s strength. 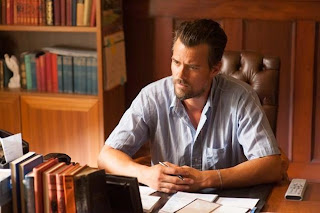 Josh (Lucas Till of X-Men: First Class) is DJ Sparks, a popular DJ in one of New York City’s premiere clubs. He spins the beats and has a bright future ahead of him in the world of music because of his talents. So it’s unfortunate when all of that comes to a pause after a drug overdose lands him in the hospital. Because of his prior drug infractions and because he’s a minor, the courts send him to live with his estranged father (Tom Everett Scott) in North Dakota for 12 months of court ordered drug rehabilitation and counseling. In a small army-oriented town, Josh ends up being the DJ for the not-so-great dance team, led by Mary (Kherington Payne of Fame), whose mom (Laura Dern) is psychologically broken after her son’s death, and forms a bond with Alex (Josh Duhamel), Josh’s soccer-obsessed therapist.

From the outside, Bravetown seems like it’s going to be a rough watch, but it comes as a surprise that it isn’t. We start off in a club and veer off into some very different territory. The atmosphere changes and it becomes more subtle, and this is probably due to the change in shift of Lucas Till’s character and the altered direction of the story. This is Daniel Duran’s directorial debut and for a first-time director, he does a pretty good job of keeping the film grounded and focused on the characters, not trying anything too fancy style-wise his first time around and this works just fine. 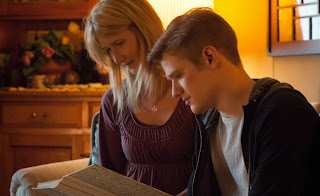 Lucas Till plays angry really well, and while his character can be moody and closed off, he never once grates on the nerves. This is mostly due to the fact that Till doesn’t overact and doesn’t reach for the melodrama when it would have been very easy to do so. However, while Till is the main character, we delve more into the personal lives of the central characters he interacts with. The focus turns to how he can help them, or trying to figure them out and coming to a resolution. And although we know his backstory and issues with his own parents, as a character, Josh never quite pushes the envelope to resolve anything in his own life. We are to assume he does, but we’re never shown any of these steps. For example, Josh’s relationship with his father is practically non-existent, and seeing that he has abandonment issues, we’re never given more than what we already know and this unfortunately weakens the film.

Ultimately, however, Bravetown is one of those films that can easily be watched from the comfort of one’s home. It has a lot of heart, and while it sometimes trips trying to maintain its fluidity as a drama, the characters (helped by a great cast) and the film’s down-to-earth atmosphere keeps it floating. It has heartwarming moments and interesting back-and-forth between characters, while keeping its story simple, if a little on the sappy side in the end. Not a bad start to Duran’s directing career.