What's New
You are at:Home»Movie Reviews»Review: ‘The Lucky One’, Starring Zac Efron and Taylor Schilling Review: ‘The Lucky One’, Starring Zac Efron and Taylor Schilling

By Mae Abdulbaki on March 6, 2013 0 Comments
Based on Nicholas Sparks’ novel of the same name, “The Lucky One” follows the story of a young marine named Logan (Zac Efron) who, by the end of his last tour, has developed some post traumatic stress symptoms and leaves his sister’s home on a quest to find the girl in the picture he found while serving in Iraq.

With the help of only a lighthouse in the background, Logan finds Beth (Taylor Schilling) in Louisiana and walks there in order to tell her that her picture saved him from being killed. Logan never gets the chance to tell her the truth until very much later and winds up working for Beth at the dog kennel her family owns. Beth doesn’t warm up to him at first and thinks he’s strange, but her grandmother Ellie (Blythe Danner) convinces her to let him stay. Throw in Beth’s son, her ex-husband (Jay R. Ferguson) and dead brother and you have a mixture of romance and a drama.
While none of the movies after “The Notebook” have been up to its romantic standards, “The Lucky One” does have moments between Logan and Beth which are quietly romantic and well executed. 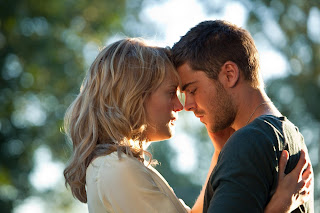 One thing is for sure: Zac Efron is way past his “High School Musical” days. He’s definitely grown up since then and matured as an actor. He gives a good performance and really encompasses what one imagines a marine to be like after having seen traumatic and life changing things. Efron even carries himself like a military man and is quiet, thoughtful, and respectful of Beth and everyone in her life.
Taylor Schilling (Beth) really portrays her character well. She plays a mom trying to pick up the pieces of her life after her brother is killed overseas. She has the full responsibility of taking care of her son, grandmother, and the family business yet never complains about any of it. Schilling brings a quiet strength to Beth as well as the raw pain of grief.
Efron and Schilling have decent chemistry but the romance falls flat under the pressure from all the other events in the film. Also, Sparks has written romances that take place in small towns so often that the setting just feels recycled and overused. 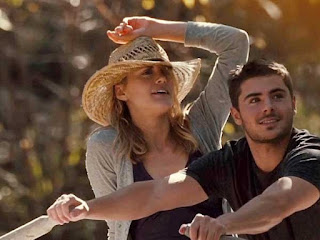 The fault of the movie is in the lack of  of certain events within the story. It is either convenience or thorough research which leads Logan to find Beth based on only the lighthouse in the background. The events at the end are glossed over and too convenient. They should have been placed at a different time in the movie or taken out completely. By that point, they are too confusing because Keith seems to have reached an epiphany earlier on after a confrontation with Logan almost ends badly. Then, he does a complete turn around and reverts back into old ways. This leaves the audience member scratching her head regarding Keith’s decisions and what reasons he had behind them.
Also, the notion that one man needs to be portrayed as perfect while the other comes off as a complete jerk brings some somewhat contrived tension to an already semi-layered story. Logan is portrayed in an almost angelic light. He never does anything wrong and is always there for Beth. The opposite is true of her ex, Keith, who is a stereotypical macho man and thinks he can treat anyone the way he likes because he’s sheriff.
At times, the movie feels too slow and more time could have been given to examine Beth and Logan’s growing relationship rather than other subplots which sometimes felt too forced. In the end, the movie is average at best and seems forgettable by the time the credits roll.