What's New
You are at:Home»Trailers»Things Get Crazy in First Teaser Trailer and Images for ‘Horrible Bosses 2’ Horrible Bosses was 2011’s surprise comedy. It was surprising because it received a mixed bag of reviews from critics, but was a general hit with audiences, earning $206 million worldwide. And with only a $30 million budget in comparison, you can see why Warner Bros. jumped at the chance to make a sequel.

The three boss-hating leads (Charlie Day, Jason Sudeikis, and Jason Bateman) are back again. Except, instead of manufacturing the exact premise of the original, the sequel sees the main characters branch off on their own after realizing that instead of working for crappy bosses, they’d rather become their own bosses. Kevin Spacey and Jennifer Aniston are back, with Colin Farrell being the only original boss who doesn’t make a reappearance due to his death at the hands of Spacey’s character.

The first teaser trailer and photos have been released for Horrible Bosses 2, and gives us Day, Sudeikis, and Bateman continuing on with their criminal history. It seems like they’ll be receiving help from Jamie Foxx once more, as well as from crazy boss Spacey, in their plan to kidnap their shady investor’s (Christoph Waltz) son (Chris Pine) and hold him for ransom. Mostly, the teaser is crazy and keeps the same comedic beats and random acts that made the first movie so enjoyably fun.

Horrible Bosses 2 opens in theaters on November 26, 2014 and you can see the teaser trailer and images below! 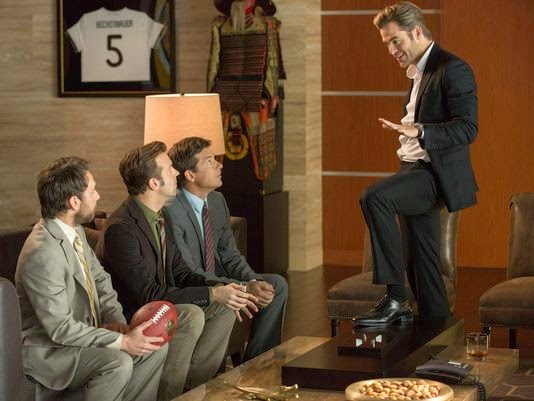